At home time at my junior school, we all lined up according to our test scores for the day: the highest scoring at the front of the line, the lowest at the back. We were then marched in a “crocodile” to the school gates where the bus awaited to take us home.

I was always a straight C pupil. If a test had a 51% pass margin, I got 51%. If it was 75%, I got 75%. This is a great way to live: you don’t get the pressure that A pupils get and you don’t get the condemnation that F pupils get. Coasting through life has long been my policy.

For whatever reason, one Friday I had top marks in my class. This was my mistake. Perhaps the subject at hand had been one to really interest me, or was about something I already knew. Whatever, I came top.

My teacher was the first male teacher I’d ever had. He seemed impossibly old at the time; a year later he took early retirement at 55. He was well-built and hairy and very fierce. He was also a bit too free with whacking you on the hand with a ruler for imagined transgressions, but those were the times.

I went to the front of the line. He reached for my hand and held it in a gentle but firm grip. I can remember all this in Cinemascope to this day: the bright summer sun and cold East Anglian breeze; that breeze moving the hairs on his hand. The watch on his wrist. My little hand in his big meaty hand. The wait for the bell to go. The walk to the… for want of a better term, staging area, for the bus.

And I knew. I just knew.

This was right. This was how it should be.

All I would ever need was a strong male hand holding mine. Always.

I got some nice feedback for yesterday’s post about places I’ve lived, so I thought – how can I top that? Ooh! I know – the schools I went to.

Of course, then I must remember how much I hated school. Every minute of it. My childhood wasn’t the happiest ever but neither was it the unhappiest – nobody ever locked me in the cupboard under the stairs or called me “it” or anything; nevertheless, not a day goes by when I’m not rejoicing that I will never be a child again.

I planned to start with my first primary school, but it turns out that not only has it closed but also they built a Budgen’s Supermarket on top of it. This postpones my tales of HORSA and also means you never get to hear of the time a teacher sent me to clear some kids from a forbidden corner of the playground then punished me for going into that corner on her bidding; suffice to say, I retain, 30 years and six sevenths of my life later, a burning hatred of (a) injustice wherever it is to be found and (b) her. 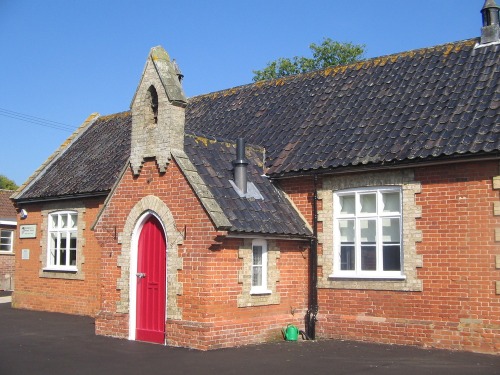 Instead, this is Honington School (picture stolen from their website), my second primary. I’ve been round and round on Google Street View trying to see it, but you can’t. Since Dunblane and a couple of other rare but horrifying events, many schools are now like Fort Knox. This one is less so, but 30 years ago you could see the road from the hall and vice versa. Now you can only see trees, robbing the school of its major selling point: it was the exterior of Walmington-on-Sea’s church hall, as used in Dad’s Army. Very little was made of this when I was there, alas, and now I expect nobody would know at all. Worse, what was once Honington County Junior School (Suffolk had a 3-stage system of Junior (4-9), Middle (9-13) and Senior (13-16) schools rather than just Primary and Secondary) is now a Church of England school, with a website boasting of how it indoctrinates the children there into believing that they share an imaginary friend.

I won a countywide prize for a collage I did of the next-door church. The prize was given to my parents rather than me; when I mentioned winning in passing to my teacher, she rounded on me for being boastful. Mrs Southwold, you’re probably dead by now. Good.

This was Clinton Park County Primary School. It’s now Tattershall Primary School, whilst the deadly rivals (ah, but this was so important when you were eight years old) Curzon CofE Primary is now Holy Trinity Primary. I was never happy at school, but this was the school where I was least unhappy. I did well here. I passed my 11-plus here, the only one in my class to do so. My final year teacher was Mr Pridmore. He had a cupboard with a fossilized mammoth tooth and a pickled mole in it. He died about 3 years ago, I’m told. Too young.

The school’s website is a marvel: made in Comic Sans (no surprise, it’s important that we rid our young people of any pretense at a design aesthetic early on) but rendered entirely in Microsoft Paint. Yes, even the text. Fab.

I can’t show you my last primary school, as it was on the camp, the only school I went to that was specifically for RAF kids. This should’ve made it better – in civilian schools, RAF children were marked as being “special needs” and, more importantly, “disruptive elements”. We were not wanted. I turned up here after Lincolnshire’s schools had broken up for the summer; Leicestershire’s schools (it’s now in Rutland) still had 3 weeks to run. I found they were studying things I’d done a full year earlier: the entire school was “special needs” in its attitude.

The worse thing was that they were doing a school play for the end of term. I always wanted to be an actor – ah, if only I’d had even a hint of talent, the things I could’ve done – and the makework of a play was ideal for me. The parts were already cast, but there was a vacancy which I was given. Something like Third Councillor – it was The Pied Piper, I think. Alas, alas, the boy who had held the role before me was very very popular in the school. I wasn’t. I never am: I’m a born cynic, never able to be part of a crowd… or a mob. They made my life hell for stealing his role. His father had been posted and he’d left the school, but I was the fall guy. Sadly, this was encouraged by the headmaster. Cunt.

11+ or not, off I went to a comprehensive, Casterton Community College. It was once Casterton Secondary Modern and now has a very New Labour title – Casterton Business, Technology and Conformity School or something. By this point in my life, it was very very clear to me that I was gay. Sadly, it was also very very clear to my age-mates that I was gay, no matter how well I thought I was hiding it (I wasn’t exactly in drag). I still managed to have my first gay sex here. I found the guy on Facebook recently, pictured with his daughter. She looks lovely.

I arrived here at Bedale High School (not the Bedales private school) with a clean sheet, although obviously still a queer. I was 14 and it must have sung out, except that this school was in the ruralest of rural areas and most of the pig-ignorant, straw-chewing, cowshit-stinking boys had no idea what homosexuality actually was.

To this day, there’s a visible line on Gaydar, Grindr and other welcome facilitators of gay sex. After you leave York heading north, the number of queers-per-million remains at roughly 1 in 5 (Grindr distorts the figures by including “men who have sex with men”, ie married straight blokes who like cock too) but mid-way between York and Thirsk you pass a line where suddenly nobody identifies as “gay”
any more and they all become “bisexual” (yeah, me too, ducky) if young and “TV/TS” if over 25. Yes, the rural boys who do boys remain ignorant that you can be a boy who wants boys; instead, they’re to be seen in slingbacks and wraparound pinafores, “can’t accommodate” (ie married), and calling themselves names their grandmothers would’ve thought old fashioned: Doris, Deirdre, Daphne. Carry on north and, just after Yarm, you reach ordinary gays again.

Making a relationship as a teen was impossible: everyone was in the closet, including the straights (not the girls: they were busy having unexpected babies or caring for prematurely aged parents who were often also their aunts and uncles). Fortunately, Mrs Thatcher’s government stepped in and made everything better by banning the discussion (they called it “promotion”) of homosexuality in schools. Books by Oscar Wilde disappeared from the library. The one teacher I had who I was 99% sure was gay stayed very very far away from me – if he’d tried to help, he’d have broken the law. And thus you understand why I have never and will never vote Conservative. This type of crap really is still present in that party – and when we get on a Stagecoach bus or East Midlands, South Western or Virgin train, we’re contributing towards a shareholder who donates to the anti-gay parts of the current Tory party.

Still, in 1991 I left school and since then I’ve learnt more every day than I learnt in my entire school career. School sucks, boys and girls. But it gets better when it’s over.

Recently typed by me

Typed by me longer ago

Typed by me quickly

There was an error retrieving images from Instagram. An attempt will be remade in a few minutes.

Things I type about

Find typing by me